The browser you are using is not supported. Some critical security features are not available for your browser version.

We want you to have the best possible experience with FATbit. For this you'll need to use a supported browser and upgrade to the latest version. 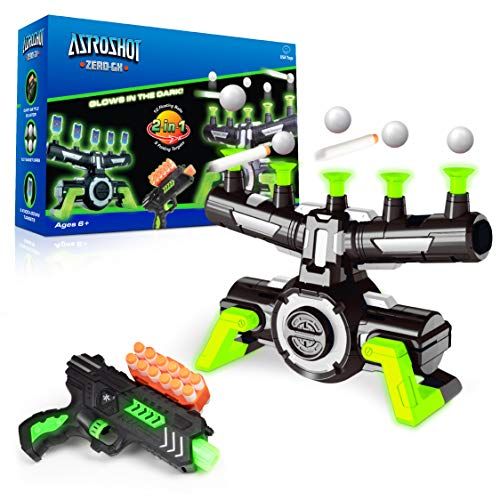 Experience out-of-this-world target shooting games! The Astroshot Zero-GX foam dart gun set is a complete target shooting game kit that glows! Grab your glow in the dark space gun, equip it with the easy clip-on foam dart holder, and shoot floating targets into outer space! Defy gravity and perform quick reloads as fast as a space cowboy with this foam dart gun set. The quick access foam dart holder lets you fire 12 rounds of foam darts at a time. Play action-packed target shooting games indoors or outdoors. These compatible targets and guns are built tough to take on space battle shooting games again and again. The super sturdy target practice shooting module features 2 glow in the dark leg supports and 5 glow in the dark target pedestals. Place the floating target orb balls on the pedestals, power up the module, and start shootinâ€™! Pro tip: Charge up the glowing green pieces in the sun or with a flashlight and see your Astroshot Zero-GX glow in the dark! Every great adventure deserves a well-fitting soundtrack. That said, this toy space gun also features space battle sound effects that take shooting games to a cosmic level! Flip the switch, turn the music on and enjoy galactic battle sounds or turn it off to score clean hits in peace. Play solo or recruit your friends for epic space battles - itâ€™s your choice, so choose the Astroshot Zero-GX NOW!